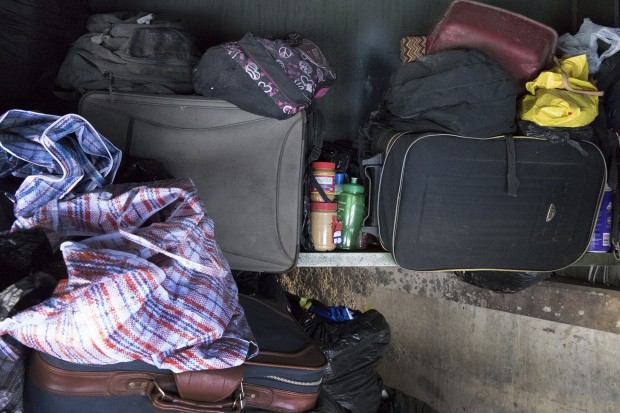 e past eight years, Richard White has lived under an  overpass near the train tracks — through every season, undaunted by  snowstorms and heat waves. He has coats hanging from the metal supports,  cans and jars of food scattered throughout and suitcases, backpacks and totes  piled high with clothes.

The 64-year-old first found himself homeless in 1988 after his house was  set on fire.

“I drifted through South Trenton, North Trenton and so

me abandoned buildings before finally making it over here,” he said.

White was one of several hundred people surveyed Wednesday in Mercer County as part of NJ Counts 2016, the statewide point-in-time count of the homeless.

“It’s really a snapshot — a one-day picture of people who are not only sheltered, but who are unsheltered,” said Marygrace Billek, the county’s director of Human Services.

Teams of volunteers fanned out across the county over a 24-hour period, covering everywhere from busy intersections and overpasses to train stations.

In the afternoon, an NJ Transit police officer Gary Denamen a CIT-NJ Center  of Excellence Graduate gave Billek and other volunteers a tour of the  makeshift encampments and tent cities that have sprung up along the train  tracks near the Trenton Transit Center.

“It tells me that we don’t have enough of the right intervention for people  because why would you live here in these elements?” Billek said.

Though she said there is room at the Rescue Mission of Trenton, “there are clearly people who are making a different decision about where they’re going to sleep at night and it’s not safe.”

The Coordinated Entry and Assessment Services Center that opened last April has focused much of its efforts on finding housing for those who have used the shelter for a long time, but will now direct its resources to the unsheltered population.

“I think we need to start thinking about more unconventional interventions,” Billek said.

Ben Thornton, outreach services director for Anchor House, said the count provides them with a new perspective and helps them see the severity of the city’s homeless problem.

“This gives us a better understanding of what their life is like to wake up from this, to try to get food, to try to get over to the building where you’re going to get these services,” he said. “What kind of mood would you be in if this is where you’re coming from?”

Behind him was an encampment littered with trash, tarps and cardboard boxes.

Thornton, who works with homeless and troubled youth, said he also got a glimpse into what could be a grim future for some kids.

“This is what’s waiting for our youth who become chronically homeless … if  we’re not successful with them,” he said.

Last year’s count recorded 600 homeless men, women and children in Mercer  County, a 5 percent decrease from 2014. In December, the county became the  first in the state to house every homeless veteran seeking help — the last of  which was found underneath the train tracks.